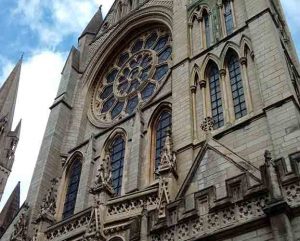 Glasswood have been involved in the window restoration of Truro Cathedral during the summer of 2017, a delightful project on a beautiful cathedral in the quint town of Truro.

Truro Cathedral was built between 1880 and 1912, and incorporates part of a 12th-century church. This is the Dolcoath Mine Window in the Chapel of Unity, which was given to the cathedral by the Tregoning family. The image shows Cornish tin miners in an idealistic setting.

Our work involved the removal of the feramenta bars that over the year have suffered with deep seated corrosion that has caused the stone to breakaway which is called spalling, the bars are about 12ft long and great care was taken removing them.

The good news was the stained glass painted windows were in very good condition and could remain in place for many years to come, the only part of the window was the opening casement that had to be removed and taken back to the workshop to be restored, along with the ferramenta bars.

metal frame-work (offen called ferramenta) of internal saddle-bars and external stanchions. The glazed panels are fastened to the fixing system by copper ties. The ferramenta are an integral part of the window as their shape often echoes the glazing pattern and because of their support function. Any conservation project should therefore examine the condition of the ferramenta. Any historical mortar used for smaller windows or evidence of any wooden frames should be preserved and recorde

By now it is abundantly clear that the window schemes in Truro Cathedral complement and develop the relationship between liturgical and architectural spaces, whilst each sequence of windows presents a multi-layered narrative on the profoundest theological themes.

The recommended tour now moves to the baptistry area, where the iconography of the windows is a reflection on the themes of Baptism and of Christian Mission. The baptistry area in this chapter is defined as the baptistry itself and the adjoining Chapel of Saint Samson and Saint Boniface.198This Chapel was created in the 1930s from what was termed the baptistry vestibule by Pearson and Benson. This chapter shows how the glazing of these two areas must be treated as a whole, as it was originally intended by the architect and the Bishop.

From 1887 to 1904, before the nave was completed, the main cathedral entrance was the south transept door. The baptistry vestibule therefore would have been reached by immediately turning left on entering the south transept door, up a flight of three steps, with a further set of steps leading directly from the vestibule to the baptistry proper. Today, the south porch door is rarely used, and the vestibule and the baptistry itself are entered from the south nave aisle. The subtle links between the iconography of the windows in the two areas, the liturgy of the baptismal service, and the spatial dimension of a progression through ever smaller and more intimate spaces has been lost for many decades. The 1930s reordering of the vestibule into a chapel effectively undermines all the original intentions of the architect and the visionaries behind the 1887 Master scheme for the windows. Saddest of all, the reordering destroys one of Benson’s most personal visions for his cathedral.

s13–s15. The baptistry vestibule (The Chapel of Saint Samson and Saint Boniface)

The windows were the gift of Walter Deeble Boger of Antony, Torpoint, in memory of his wife Amelia Harriet Boger, and were inserted in December 1889.199

These three lancet windows were designated in the 1887 Master scheme to be filled with scenes from the life of St John the Baptist.200 In the two years between the publication of the 1887 Master Scheme and the insertion of these windows, a significant addition to the subject-matter was made. This was the earliest example of how the Master Scheme was subtly modified as the building of the cathedral progressed and new donors came forward. The new addition of Elijah and Noah in s13 and s15 turned the vestibule glazing into a typological scheme in the manner of the quire transepts (S4 andN4 in Chapter 7). The placing of John the Baptist between these two Old Testament figures reinforced his positioning at the end of the line of Old Testament prophets. This has already been the case in the top right lancet of the great east window, where he is positioned as an Old Testament figure in front of Elijah (E1 in Chapter 6). Elsewhere in the cathedral Noah and Elijah were identified in the 1887 Master Plan to be included in the projected northeast quire transept window (N4, N4 4g and N4 2c), and, together with John the Baptist, appear as three of the six figures around the Truro pulpit.201 Traditionally, the figures of Noah and Elijah have a special significance in typological schemes. In the baptistry vestibule window Noah is shown holding a model of the Ark, which functions both as a symbol of the Ark of the Covenant and as the connection between salvation by water and the sacrament of Baptism.202 Elijah, shown with his raven waiting for water to end the drought in the desert, was one of the prophets named in the debate about John the Baptist’s identity, as well as being one of the two prophets present at Christ’s Transfiguration.203

Each of the lancets in the baptistry vestibule is divided vertically into three panels.

The first two baptistry lancets were donated by the Deanery of Penwith in response to the Internal Fittings Appeal, and each lancet cost £40. The third lancet was donated by the Misses Frances Gidley Pedlar and Ann Pedlar, whilst the last was the gift of Mrs Mary Rogers, at a cost of £50. Once the donations were confirmed, the designs were ordered in April 1887.205 All four lancets were inserted in time for the consecration of the cathedral in November 1887.206

It is obvious that something new for the themes for the baptistry windows was needed, as all the orthodox baptism iconography had already been used in the windows of the vestibule. Mason’s radical solution to the subject matter for the four windows of the cathedral baptistry is one of the most imaginative in the whole building.

The baptistry windows continue the ideas of the vestibule in that they form a new version of typological juxtaposition of figural types from an earlier age with antetype events from a later age. However, it is not the customary Old and New Testament typology that Mason used in this baptistry, but a specifically Cornish set of references. This integration of Cornish Christianity with the general narratives of Church history will reappear more and more frequently in the later Church History sequences of the north quire, north transept and nave aisles. These Cornish themes for the baptistry were a major part of the 1887 Master Scheme, and can be viewed as Benson’s attempt to forge a distinct Cornish identity separate from that of the original Diocese of Exeter.

The 1887 Master Scheme identified the life of Henry Martyn as the main subject for the four baptistry windows.207 Each lancet contains two episodes from the life of this early 19th century missionary. Born in Truro in 1781, he was the third son of a Gwennap miner. He was educated at Truro Grammar School and St John’s College Cambridge before choosing his missionary career to India, Persia and Armenia. His local significance was emphasised in a contemporary description of the new cathedral’s exterior (when viewed from Cathedral Lane):

to the west of the transept is seen the circular roof, the tapering pinnacles and open parapet and narrow lancets of the Baptistery. This portion of the building not only gives variety and character to the architectural design, but, from the fact of its being a memorial to Henry Martyn, the devoted missionary, a native of Truro, will always recall and link the Cathedral with sacred memories of the missionary work of the Church.208

There is much evidence that this was a subject close to the heart of Canon Mason, the first Canon Missioner.209

What makes this subject so appropriate for the baptistry of Cornwall’s first cathedral for over nine hundred years is the manner in which the Martyn theme is linked to the Celtic missionary saints from Wales, Ireland and Brittany who originally established Christianity in Cornwall. One can sense Mason’s hope that each baptism in the baptistry would be the admission of a new member of the Christian church who might eventually be inspired by the earlier examples of mission portrayed in the windows.

About the Author: Garry Cox